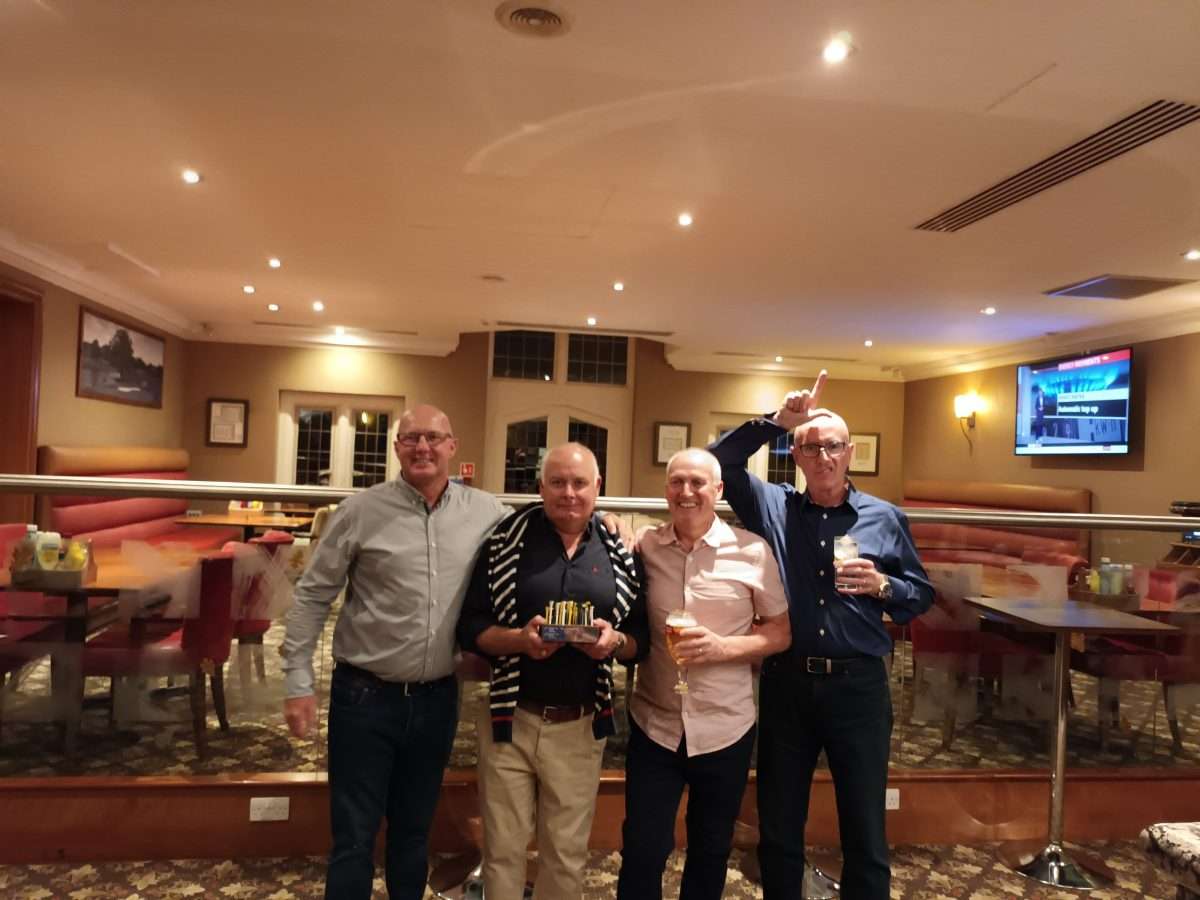 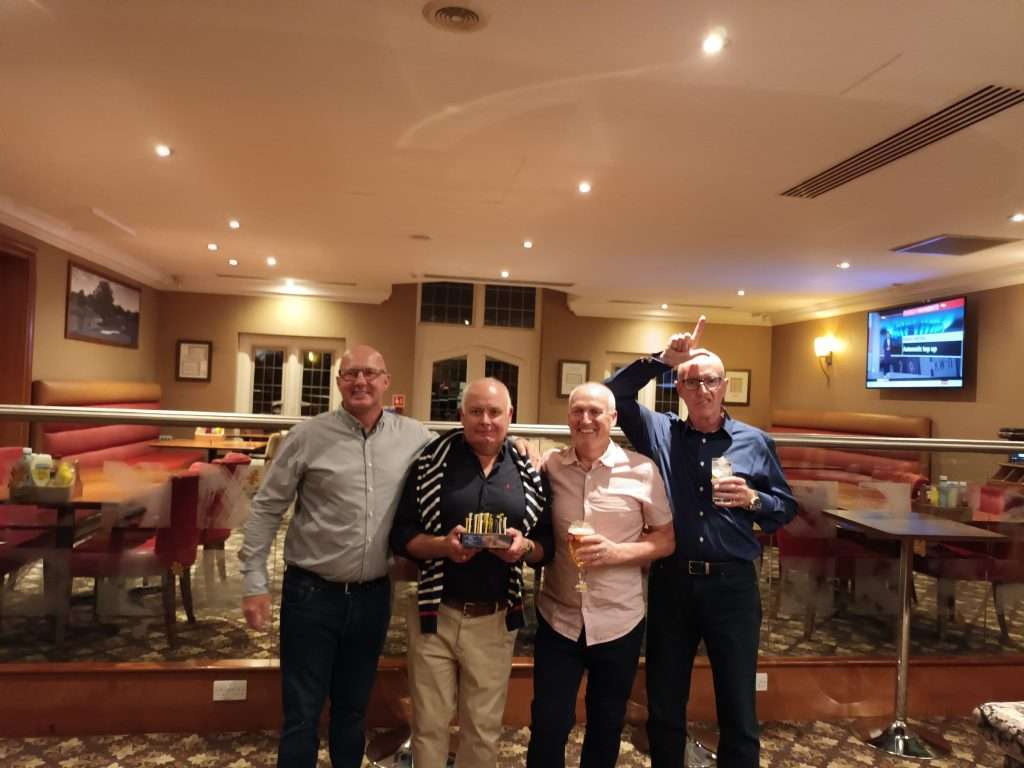 The 10th year of this annual event was played in late July at the new match venue of The Forrest of Arden Marriott Hotel and Country Club in Hertfordshire.

Mark Fleming and Simon Greig represented BBUK with Steve Pilbeam and Neill Birch carrying the flag for A W Champion.

Unfortunately, the BBUK boys preparation for this hotly contested match was a 12 hour boozy retirement party the afternoon and night before! This combined with the fact Mark had not hit a golf ball since August 2021 was something of a concern and the normal pre-start tradition of several beers was replaced by a single glass of weak shandy for the BBUK pair!

On the 1st tee, a short reachable PAR 4. Mark took the sensible decision to play a gentle 6 iron for position but it still turned out he’d bitten off more than he could chew, when the topped tee shot tumbled into the jungle a mere 60 yards away, this could be a long afternoon! With Steve scoring a PAR on the tricky short hole, it was Champions 1 up going into the 2nd.

At the 2nd, Steve’s drive looked short and possibly in trouble whilst Mark hit a good one, as did Neill and Simon. It turned out that somehow (and no doubt helped by the baked fairways), Steve’s ball was eventually found in prime position. Miraculously and surely following some divine intervention, Mark made a Par on the PAR 5 over water and won the hole bringing the score back to level.

After another evens hole it was Simon who made a Par 3 on the 4th hole to put BBUK 1 up.

6th and 8th holes were even with Champions taking holes 7 and 9 with steady driving and consistent shot play from Neill, leaving them 2 up at turn. Starting to clear their hangovers the Brooks boys played the booze card and suggested a drink was in order!

The 10th was evens with Neil looking for his drive in the driving range (pick n mix) Simon used witchcraft to thread his drive through the trees.

Amazingly the beer tactic paid off as Champion’s game crumbled, losing the next 4 holes in a row, putting the BBUK boys 2 up.

THE 15th !! Mark hits a great drive with the other 3 not so good, Mark is left with a sand iron to the green and 2 putt to win the hole, which would leave BBUK 3 up with only 3 play. Unfortunately, the importance of this crucial moment in the match had dawned on him. The next shot was the stuff of golfing nightmares and ongoing mental health counselling. The sand wedge thinned the ball which went out of the back of the green and never to be seen again. Defeat had been snatched from the jaws of victory!

At the 16th Par 3 only Steve found the green with his tee shot and secured the hole to leave the match even going into the 17th. Apart from Mark, the others had decent tee shots in play with the agonising decision at such a crucial moment in the game, to bail out or take on the approach shot over the distant water. Neil with the furthest to go played safe and next it was Steve who went for glory over the water but pulled it left missing the water but leaving a lot to do. Team BBUK decided to play safe and still be in prime position. Simon chose a sand wedge to clear the shortest angle over the water but as so often can happen with a simple safe shot, a slight lack of commitment on the shot and he caught it just a bit thick and the ball ran out of legs about a foot from the far bank!! (at least Mark will have some company at the counselling sessions!) Champions went 1 up with just 1 to play and on the basis of being current trophy holders, they had retained the trophy, even if BBUK could level the match on the final hole.

At the 18th Mark found a 2012 BBUK logo Pro V1 ball in his bag. What could possibly go wrong over the water? After carrying that ball in his bag for 10 years, it was now 10` under water. Next ball same thing! The 18th was hole was shared, so after an amazing battle Champions had deservedly retained the trophy 1 up. 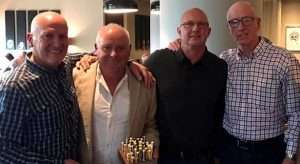 The 9th Challenge Trophy was held again at Five Lakes 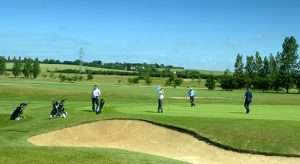 Whilst in some doubt for a while, the 8th Challenge 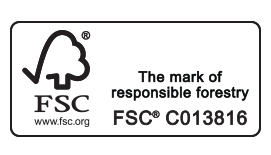 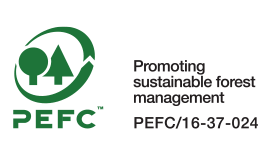 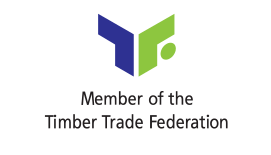 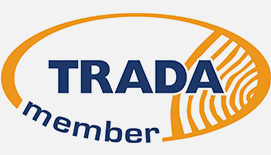 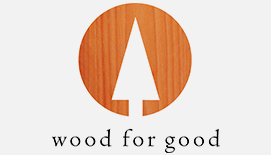 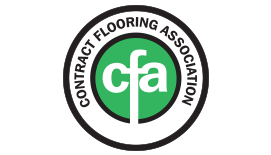